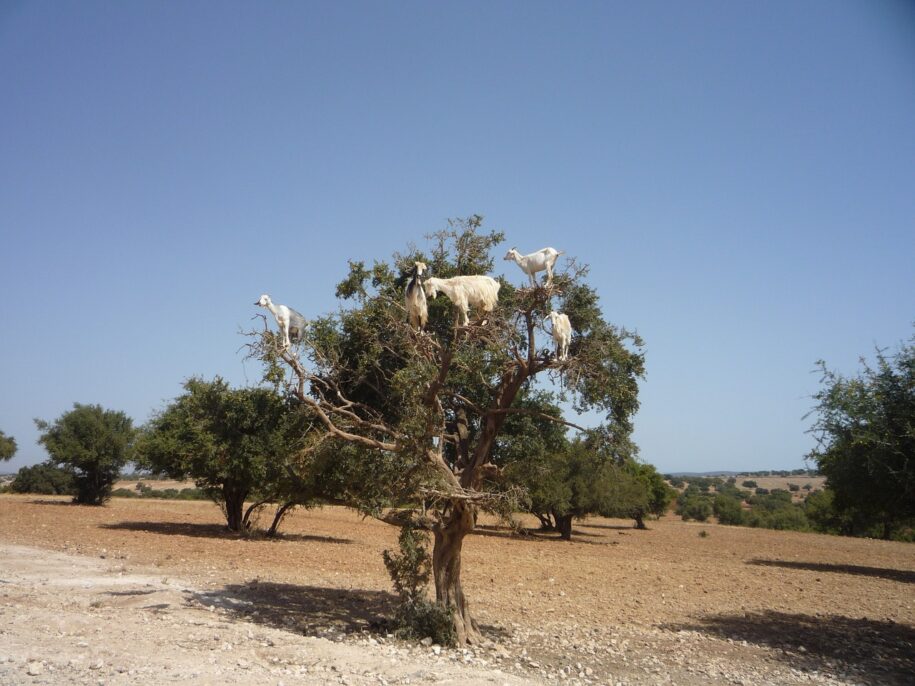 Posted by uniquemoroccotravel on September 27, 2021 | Featured | No Comments

There is nothing more genuine or unique about Africa than Moroccan Argan oil & its trees, Argania Spinosa in Latin. These are ancient trees whose remnants grow in the area southwest of High Atlas and west of AntiAtlas mountain ranges along the west Atlantic coast between Essaouira and Agadir.

Beside the road on the popular day tour from Marrakech to Essaouira, you will find the goats perched on the Argan trees in an amazing view. It provides a great photoshoot opportunity, certainly for albums and memories of Morocco. Even though it is entertaining to watch goats’ antics, many tourists do not realize what tree they are looking at and its significance.

These ancient trees grow very slowly in salty, arid soil. They protect the soil against water loss as well as rain or wind-induced erosion. This helps to maintain soil fertility and slows down the expansion of the Sahara desert sands. They can live about 250 years and grow about 10 meters in height; however, they almost double their size in width.

These trees are not only important for soil health and providing shade from the strong sun. Their press its fruit and the result is the Argan Oil or Moroccan golden liquid. But we will talk about this amazing oil and its properties later.

These Argan forests grow on plots of land owned by Berber families for generations. As such, they used wood for heating and making charcoal. The farmers used it for their flock of sheep, goats, and camels to forage and graze on fruits and leaves as a cheap food source. Most of the Berbers inhabiting the area were not aware of the value of these trees.

It led to deforestation and degradation of these magnificent trees and forests. Morocco was losing more than 600 hectares of Argan forest each year. To protect the Argan forests UNESCO declared the area in which the Argan tree grows a “biosphere reserve”, precisely Arganeraie Biosphere Reserve in 1998. The reserve covers more than 2,560,000 hectares of land. The main purpose is the protection of the ecosystem, reforestation, and education of local communities by researchers and scientists.  As mentioned above the expansion of the Sahara is the real threat to the livelihood of the population as well as the health of all fauna and flora living in the protected area.

These conservation efforts coincided with international interest in Argan Oil. The liquid gold of Moroccan Argan oil was popular with local Berbers for many centuries. They used the oil for culinary, medicinal, and cosmetic purposes. Moroccan women used it for sun protection, skin moisture, and hair luster.

The fruits of argan trees, harvested between June and July are left to dry until they form a dark brown husk around the Argan nut. The argan nut looks like a cross between an almond and a walnut in size and appearance. Traditionally the argan oil was extracted by women cracking the shells with sharp stones after which they ground the kernels into a brown paste between two large blocks of rock.

Women use Hand kneading to extract as much oil as possible from the mixture. It would take about 1 week and about 20kg of Argan nut kernels to produce 5 liters of oil. This was a very labor-intensive process with a very low yield and was only sufficient for local consumption and use. In order to compete internationally with foreign companies, a huge effort by  Professor Zoubida Charrouf at Mohamed V. University in Rabat, King Mohammed VI, and European NGOs were put forward in creating Women Argan Oil Co-Operatives.