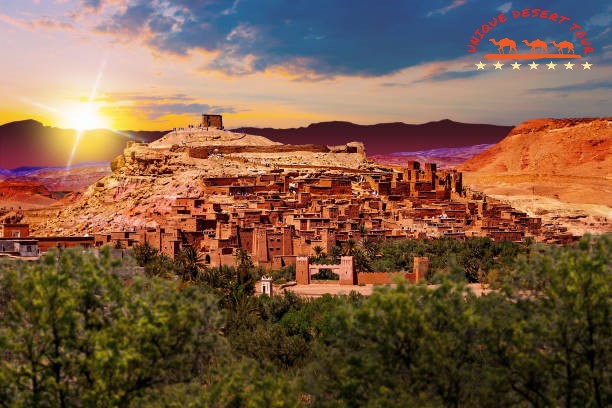 Posted by uniquemoroccotravel on October 27, 2021 | Featured | No Comments

As you probably know by now, I am a huge fan of Game of Thrones Morocco. Not only do I follow the series assiduously (and look forward to 2019). The Iron Throne, in addition to the story that is very compelling for me, also has a peculiarity. It is filmed in spectacular locations, often easily recognizable. In Morocco, I was able to visit all the places immortalized by the series, thus creating a real mini-itinerary for fans like me and for those who want to know some curiosity about this Unique Morocco Desert tours.

Here, as promised, is my itinerary on the trail of Game of Thrones in Morocco:

The Kasbah of Ait-Ben-Haddou is one of those places that makes you exclaim “Wooow!” with your mouth wide open from the very first glance. This wonderful fortified city is located between the Sahara desert and the city of Marrakech, on the ancient caravan route.

The village stands on a hill, right next to the dried-up bed of the Ouarzazate river, which can be crossed thanks to a – as a local boy called it – “Berber bridge” made of stones and sandbags or by a more stable concrete bridge not far away. This wonderful UNESCO heritage site is extremely touristy but definitely worth seeing. Today, unfortunately, the kasbah is semi-inhabited, there are now very few families left to live in the village. Most of the houses are reserved for tourists, in the form of riads or bazaars. By now this kasbah remains standing only thanks to tourists and the film industry, there is little authenticity left. A bit sad, but it is certainly neither the first nor the last place to suffer this bitter fate.

But let’s get to it, what did they shoot here? Ait-Ben-Haddou in the fantastic world of Game of Thrones Morocco is none other than Yunkai, one of the slave cities conquered by Daenerys Targaryen during the third season.

Even the famous finale of the third season – one of the most beloved among fans – saw its birthplace in this magical place. The scene is probably one of the most spectacular ever filmed. Daenerys frees the slaves and launches into a veritable bath of the crowd, acclaimed as “mother” and liberator of chains.

For the Kasbah of Ait-Ben-Haddou, this was certainly not the first time to appear on the big and small screen. In fact, famous films such as Lawrence of Arabia, The Gladiator, The Mummy. Tea in the Desert and Alexander were filmed here.

In Ouarzazate, practically in the middle of the desert. There is a place that always arouses some interest: the Atlas Corporation Studio. I didn’t have the chance to visit them inside, but I did take a stroll in the kasbah of Ouarzazate. Less beautiful than Ait-Ben-Haddou, but still fascinating for those who come across this type of construction for the first time.

In the series, we see the Altas Studios several times, especially in the storyline of Daenerys Targaryen. In the first season, in fact, Dany is in Pentos, guest of the illustrious Illyrio Mopatis, the man who gives her the three famous dragon eggs. Moreover, this is where she also meets her future husband, the wild and flamboyant – not to mention bonafide – Khal Drogo. All of the scenes set in Pentos were shot in these very studios, affectionately christened “Hollywood.”

To the wonderful Essaouira, I have already dedicated a separate post. It is a city too beautiful to be relegated to a simple paragraph. The location scouts of the series have seen it through and did not miss this wonderful UNESCO World Heritage Site, including it in several key scenes.

We’re back in the thick of Daenerys Targaryen’s story, specifically in season three. Dany and the multi-faceted Jorah Mormont are walking on the walls of Astapor when they suddenly suffer an attack aimed at killing Khaleesi. The mission, of course, fails thanks to the valiant intervention of knight Barristan Selmy. In all of this, the walls of the fortress known as Skala du Port are clearly glimpsed, along with the famous bastion.

Another rather famous scene of the third season filmed in Essaouira is the first meeting of Daenerys with the Unsullied. The loyal and ruthless army still fights at her side. The outcome of this meeting, filmed in the studios of Ouarzazate, I think we all know a bit ‘all (spoiler: the former slaver Kraznys is burned alive by one of the dragons of Khaleesi and she takes the whole army aggratise). I do not think we need to repeat it.

If you look closely at the scene, you can clearly distinguish the circular bastion Borj el-barmil, part of the Skala du Port fortress and visitable with the same ticket. Of one thing I am certain: they did not need to recreate the effect of the whipping wind, Essaouira I think is the windiest place ever visited, not even the Valle de la Luna in Chile has reached so much!

Morocco Desert Tours will take you to a variety of beautiful locations and exciting activities. As a result, we’ve included them here to give you an idea of where you’re headed.

The details are not all included in the list. Please let us know if there is any destination, activity, or stop you would want to include in your trip with us.

The Kasbah of Ait Benhaddou:

As the severe rains battered this fortified city of towering kasbahs and collapsing walls, its people migrated to more contemporary digs on the other side of the Ounila River, with the exception of a few hardy souls who remained in the previously glorious ksar. In the 1940s, more over 90 families lived in the Kasbah of Ait Benhaddou; currently, just five households remain within the stronghold.

Kasbah Ait Benhaddou, a UNESCO World Heritage Site since 1987, was formerly a key station along the caravan route between Marrakech and the Sahara. The remarkable appearance of southern Moroccan architecture is estimated to be 17th-century, and it includes a mosque, two cemeteries (Jewish and Muslim), a public plaza, and threshing grounds beyond the ramparts.

Despite the fact that it is not fully abandoned, the earthen construction is subject to weather and neglect. While the property has retained its authenticity, a lack of care and a scarcity of people have resulted in significant degradation. Officials assigned a five-year plan to care for and restore the ksar between 2007 and 2012, utilizing as much wood and as many earthen techniques as feasible to maintain the monument historically conserved. One of the few remaining families created a traditional café to offer guests an idea of the fortress’s historic lifestyle and to maintain their culture and legacy.

The Kasbah has used as a backdrop for several worldwide films and television series, including Game of Thrones, Laurence of Arabia, and Gladiator.

Ouarzazate is a major tourist destination in Morocco, not only because of its ancient sites, but also because of its famous film studio. The studio has an outstanding track record of shooting Hollywood and international films, giving it the moniker “Africa’s Hollywood” and positioning it as a prominent film destination in the Middle East and North Africa area.

Ouarzazate is located in the Draa-Tafilalet area, south of the High Atlas Mountains. The name of the caramel-colored oasis is derived from the Amazigh (Berber) terms “ouar,” which means “without,” and “zazate,” which means “noise,” resulting in the phrase “without noise.” Ouarzazate is also known as “the desert’s entryway” or “the Sahara’s doorway.”

With its appealing components such as enormous mountains, oases, dunes, deserts, and seductive Kasbahs and ksours that astound tourists with its ancient designs, Ouarzazate remains one of Morocco’s most popular tourist destinations.

Ouarzazate, often known as “the valley of hundreds of Kasbahs,” is home to the Kasbah Taourirt as well as the UNESCO World Heritage site Ait Ben-Haddou.

Kasbahs are symbols of Moroccan cultural heritage. In Ouarzazate, seven Kasbahs have been rebuilt and are currently recognized as tourist sites.

When you think about Morocco, the first thing that springs to mind is Marrakech. A vacation to Morocco is not complete without a stop in beautiful city. Let us look at what draws people to Marrakech.

Marrakech, often known as the Red City, is Morocco’s second biggest city. It has a population of around 800,000 people, and the majority of the houses are colored read. Medina of Marrakech It is definitely a vibrant city of entertainment and is known as one of Morocco’s gems. It is a key economic hub with a number of emerging sectors and marketplaces.

It is located at the foot of the Atlas Mountains, which provides it a very picturesque setting. Like many North African cities, it is split into two parts: the medina (the old fortified city) and a contemporary city adjacent (called Gueliz). The city boasts a fantastic climate, with gleaming white snowy winters and hot, steamy summers. The kindness and sociability of the locals is well-known across the world.

The name is most likely derived from the Berber words’mur(n) akush,’ which means “country of God.” Until recently, the Arabs, Persians, and Europeans referred to Morocco as the Kingdom of Marrakech. It was created in the 11th century and served as the capital of an empire spanning from Spain to Senegal.

Historically, it was a key crossroads for caravans heading to Timbuktu for commerce. Though primarily utilized as a resting spot, it was eventually taken over by Almoravid leader Abou Bekr as a strategic site for troops. Youssuf Ibn Taschfin, his cousin, erected the first mosque and residence.

The Almohads advanced it further in the 12th century. The 9km red earth wall erected under the Almoravid era may still be found today. In the 16th century, it formed part of Ahmed El Arj’s Saadian Empire. They constructed several beautiful structures and tombs, many of which have been well preserved.